I’ve been up here in Anchorage for twelve days now. I’m settling in at work, learning my way around the city, and making some new friends. When I first announced I was heading north, most people would comment on how crazy I am because it’s so cold up here. (Then they’d quickly talk their way out of that statement by thinking about the adventures to be had in The Last Frontier….I did the same thing.) As I sit here, coffee in hand in front of my cozy little fireplace, I can look out one of my amazing picture windows and see standing water on the ground. It is not frozen. Not today, anyway.

What I’ve realized thus far is that there seems to be a big difference between seven degrees and fifteen degrees. (I’m talking fahrenheit, people. Alaska might have moose, bears, and sled dogs, but they do not have the metric system. Rumor has it they tried once, but Bigfoot ate the conversion chart so US Standard remains …..)

I am not a meteorologist, nor have I played one on TV. I do happen to know a few and perhaps they can weigh in on how, why, and when this happens, but it appears to me that everything crystallized once the temps dipped below 15. I’ve been trying to put into words how amazingly beautiful that is but I just can’t seem to do it justice. It’s stunning. Peaceful. Inspiring. It reminds me of Narnia. (If you have ever seen the movie you would know what I’m talking about.)

I have always loved a good snow storm, especially the immediate aftermath when the snow still clings to the trees and coats everything in sight. This is like a cross between an ice storm and a snow storm ….. and it’s touched by the amazing sunlight we are blessed with for six hours a day right now. The sun doesn’t get very high in the sky, and seems to cast a pinkish/orangey glow on everything. If it’s cloudy, there is a bluish hue that blankets everything, making it seem colder than it is.

In an attempt to do something touristy and adventurous, George and I went horseback riding on what was the coldest day yet. We drove an hour outside of the city and saddled up at around 2:30 in the afternoon. When we left Anchorage the temp was about 22 ……. when we got to Palmer it was 7. The guide said we were nuts, George assured him it was me who was the nutso. I wore two coats, lined boots, toe warmers on the tops and bottoms of my feet, hand warmers in my furry gloves, and a hat and a hood. During the two and a half hour trip, I was totally fine. My knees were a little cold as I had on jeans but other than that I bundled up right! (I had on jeans and thermal leggings but probably should have had snow pants on.) George only had his cowboy boots with him, and despite the toes warmers, leather just does not protect from the cold. His feet were frozen within minutes.

We rode a little through the woods and then out into a valley that we were told is a marsh/lake in the summer. Everything was crystallized. The views were breathtaking. It was just the three of us and an occasional moose spotted in the distance. We could hear gunshots off in the distance, hunters and a firing range miles and miles away. We saw many small planes flying low over the valley and as we stopped to light a fire and warm up a bit, one of them made its way right above us to make sure we were okay. A friendly wave and they were off again. I don’t even care that I looked like an Oompa Loompa all bundled up in the pictures the guide took for us. It was a truly spectacular day. As we rode back to the base, a full moon was rising over the mountains. Call me crazy, but I’d do it again in a heartbeat.

So how cold is cold? Does a phenomenal backdrop make it more tolerable? I have a ten minute drive to work and that is not enough time for the car to warm up. If it’s below 15, the ride combined with the quick walk from the car to the building, means my toes are cold for at least an hour. The past few days have been around 30 and now that feels like summer to me!

I live in Anchorage, not the far north. When you “southerners” think of Alaska, you think of subzero, rugged outback, bearded men in a remote village somewhere. Up north it’s frigid, so I am told. I will probably visit one or two of these places in my time here. For now, I’ll stick to the beauty that is below 15 but above 0 and go buy some more fuzzy boots. (With a little heel of course.) 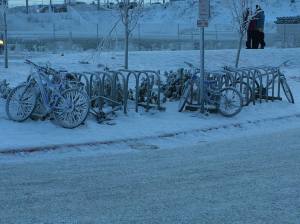